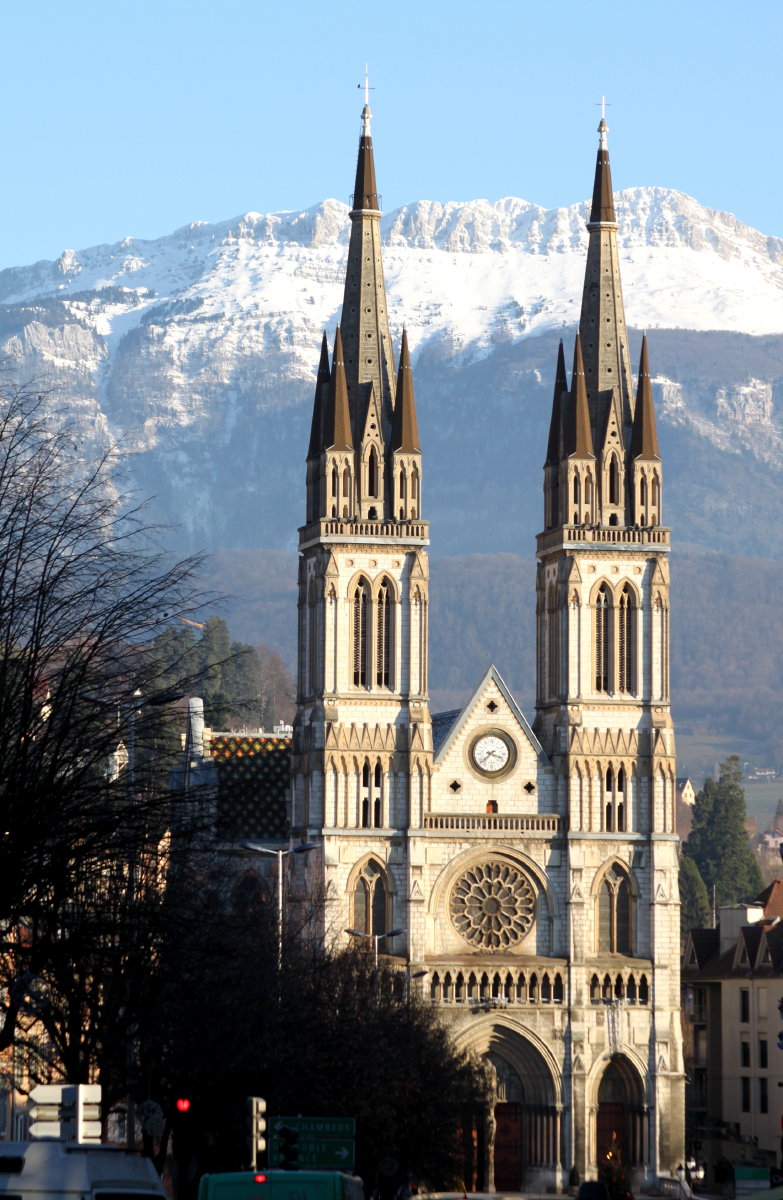 Voiron, a mid size town of 20,000 inhabitants, gate to the Regional Chartreuse Park, is  located  at the foot of the Alps 85 km south of Lyons  and 25 km away from Grenoble, both regional capitals easily reached either by motorway or by train. It is the centre town of the Voiron district, a group of 34 towns and villages totalling 92,000 inhabitants. Close either to ski resorts or to the very pretty lake of Paladru, Voiron offers a good life with its central historic pedestrian area, its cathedral, its shadowy promenade which accommodates two weekly markets, and the beautiful Town hall park.

First settled by Allobroges gallic tribes as early as the 3rd century BC, the site of Voiron was then occupied by Romans; by the Middle Ages it had become a significant crafts and market town. The presence of peasant knights at the turn of the 10th century has been established thanks to the discovery of lake dwelling remains at Charavines. The work of hemp growing  in the nearby Isère valley allowed the solid expansion of the textile industry, so that by the 17th century, this had become the major economic activity in the town, which still  today hosts one of its flagship mills created in 1630 the Denantes Weavers.

In 1884, Félix Bonnat founded his renowned chocolate factory and shop. From the beginning he imported first-choice cocoa beans from the best producers around the world in order to roast them and turn them into chocolate bars and dainty morsels. Stéphane Bonnat, the fourth generation in a chocolate-making family, perpetuates the tradition and has diversified the offer a variety of up to 60 chocolates. The Bonnat Company sells its products in more than 180 shops in France and abroad with 2,000 outlets worldwide. 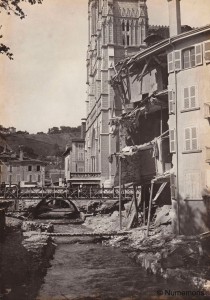 Throughout the 19th century the Industrial Revolution favoured the settlement of numerous textile and paper mills by the river Morge. Subsequent to a heavy storm, the water level rose on June 5, 1897, causing the destruction of houses and shops, and great damage to the church square. The awful disaster also made 1,500 female workers redundant in textile factories. Afterwards a canal was made and the river carefully maintained.

In 1898, Noël Perrot-Berton, a chemist, devised the recipe of a concentrate of liquorice flavoured with aniseed natural extract. Named Antésite, and manufactured at the factory in Voiron as soon as 1899, it remains today the biggest-selling product of the brand.

In 1910, the hospital was built on the location of the former castle (whose last visible remnant is the Barral Tower). The plan to move it to a more accessible place would allow to keep above 1,000 jobs.

After most textile factories closed down in the 1950s, other manufacturers (Ruby, Radiall, King Jouet) took their place and carried on with the economic development, notably with the world-famous ski-making company founded in 1907 by Abel Rossignol. Nowadays these businesses may have relocated outside the town, but they are still within Voiron district.

Last but not least, where history, spirituality and business meet, the Carthusian monks’ distillery has been producing for four centuries the celebrated Chartreuse liqueur. 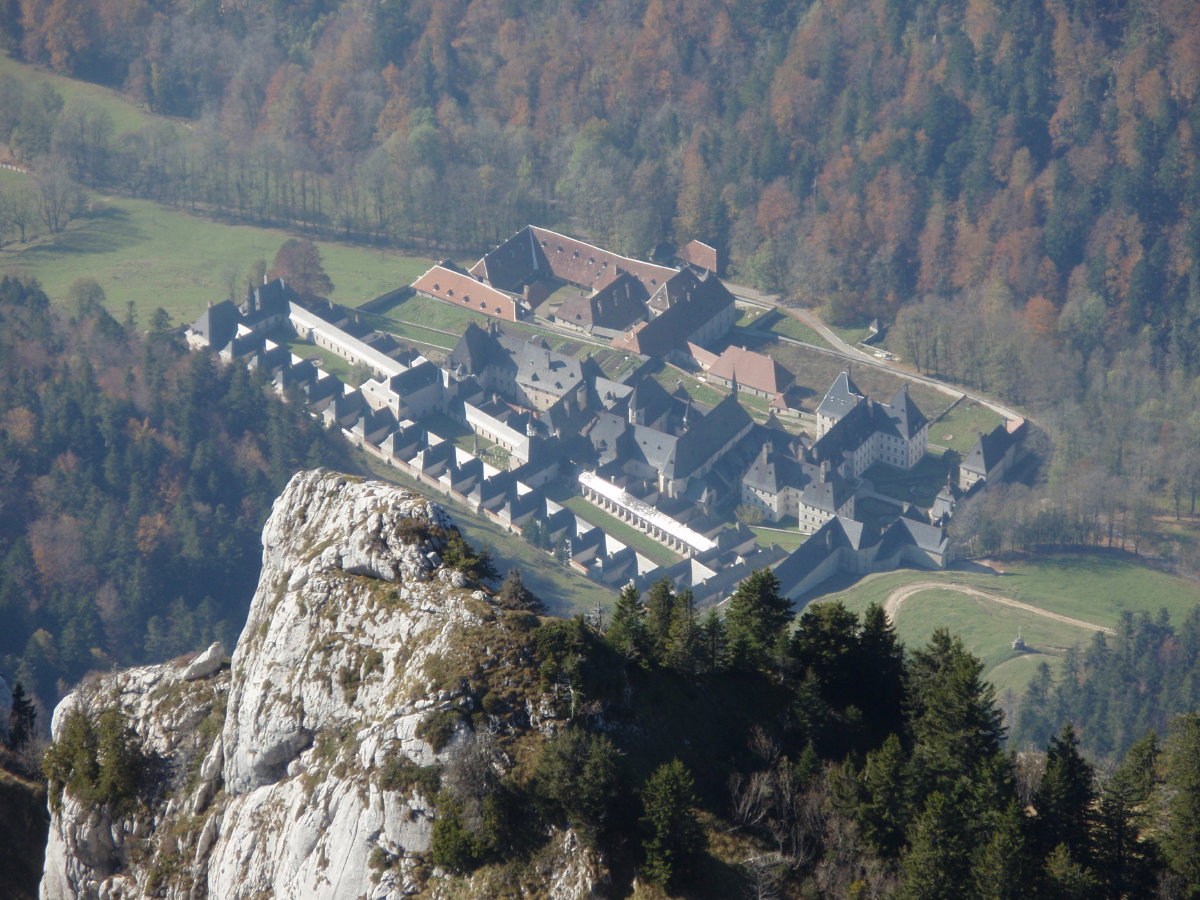 Although the distillery has been operating in Voiron since 1935, the monks have been running it from the Grande Chartreuse monastery situated in the mountains, as they are the sole keepers of the ancient recipe.

Ever since 1356, Voiron has organized each year the prominent St Martin’s Day Fair (Foire de la St Martin) that repeatedly attracts over 200,000 customers on the 10th and 11th of November.

The town of Voiron combines the benefits of a medium sized central town endowed with significant job resources (the tertiary sector now being predominant), with those of the countryside, provided by the dynamic agricultural activities of the Voiron district, what with market gardening, stock breeding and especially walnut farming.

Rich with its history and close to the Prealps and Alps, the most beautiful and vast playgrounds in Europe, the town has also developed numerous sports facilities which nurtured a robust sports performance tradition (Combat sports, rugby, basket ball, rock climbing, dancing , skiing of course, tennis…and bowl games). The Voiron sportsmen and sportswomen achieve excellence in various activities, successfully taking part in national and even international competitions. One the most remarkable sports facilities, the La Brunerie property, was recently converted into a sports businesses park with numerous sports equipments, including a brand new climbing wall.

Cultural policies are just as dynamic. The Grand Angle theater regularly hosts bands and troupes and first class shows, thanks to its huge audience capacity and up to date audio-visual equipment. The Polychrome accommodates the Voiron Music and Dance School, whose numerous students of all ages regularly take part in the cultural and memorial venues of the Town. The Philippe Vial media library offers all possible cultural media in a modern and efficient environment. The Mainssieux Museum not only shows the works of the eponymous local painter, but also regularly organizes theme shows. The town restored entirely its old XIX th century granary market into an up to date Associations House, providing the numerous and dynamic Voiron societies with meeting rooms, offices and showroom facilities.

Taking into account its exceptional location, history and sports and cultural facilities, Voiron also brings to light a touristic vocation. Attractive to both winter sports amateurs and summer time visitors looking for lakes and mountains, the town offers a large all season range of sporting and cultural leisure activities.

With this wealth of assets, Voiron has stressed its European relationships through twinning partnerships with:

With the help of the Town and the Twinning Committee, the Voiron citizens, businesses, societies and schools maintain and develop exchange activities with these European towns and other partner towns.